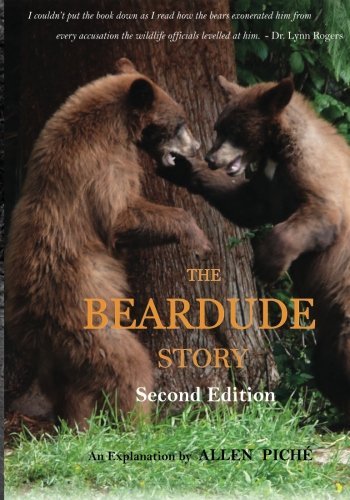 It’s been called one of B.C.’s most bizarre drug cases in recent memory. A story with a cast of characters including an oddball hippy, a pot-bellied pig, an overly friendly raccoon and twenty-four black bears. Oh, and a thousand pot plants, apparently guarded by the bears. The bust took place in August of 2010 near the Village of Christina Lake, British Columbia and the story travelled to all parts of the world, including the United States, Denmark, England, India and Russia, where a news anchor lady could not stop laughing as she read the story. The New York Post declared, “Don’t Smokey near this bear.” Today, Allen Piche, aka ‘The Beardude’, announced the release of his book, The Beardude Story, which chronicles his side of this strange tale.

'In my opinion, its prohibition, which was jammed down our throats against the wishes of many wise and eloquent voices for the seventies, is one of the tragedies of our society in m lifetime. The choice was, 'drugs are a health issue' versus 'drugs are a legal issues' Shame on those who perpetuated the myth that it was a dangerous drug and had to be controlled. Shame on those who, through fear and ignorance, later began the war on drugs, that nifty bit of leadership which did nothing but the opposite of its intentions. It twisted or ruined the lives of so many promising young people, the ones who might have become leaders. It crushed our belief in government and law as positive forces and raised a level of rebellion that many of us still embrace. It created the gangs and violence that we have today, just like the prohibition of alcohol did in the early years of the 1900's. Did it never occur t these people that a war on drugs is really a war on the people, their own people, thus creating a cold civil war that has lasted for over forty years?'

'Think of this war's real causalities: tens of thousand of otherwise innocent Americans incarcerated, many for 20 years, some for life; families ripped apart; drug traffickers and blameless bystanders shot dead on the city streets; narcotics officers assassinated here and abroad, with prosecutors, judges, and elected officials in Latin America gunned down for their courageous stand against the cartels; and all those dollars spent on federal, state, and local cops, courts, prosecutors, prisons, probation, parole, and pee-in-the-bottle programs'