Dustin has been released. Welcome home. Chris was in prison for 13 years for marijuana. 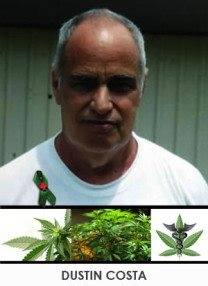 Dustin Costa was arrested  on cultivation charges in February 2004 and was facing trial in Merced Country Superior Court when he was rearrested Aug. 10 and his prosecution taken over by the U.S. Attorney’s Office. Some 900 plants were recovered from Costa’s Merced greenhouse. In a federal trial the jury was not allowed to weigh Costa’s claim that the plants were all destined for medical-marijuana users and dispensaries.

Costa is a Vietnam-era Marine Corps Veteran who had experience as a union organizer. Using operating guidelines and corporate by-laws created to be in complete compliance with state laws, Costa was and his legal team felt confident that they were paving the way for a legal model. Willingness to do political work is one of the explicit conditions for membership in Costa’s group.

Costa and supporters protested Congressman Dennis Cardoza’s “no” vote on the amendment that would stop the DEA from raiding growers and distributors in states with medical-marijuana laws. They wore black shirts with green leaves on front and back with saying like “safer than asprin”. The team also helped to block local moratoriums on cannabis dispensaries and provided court support for a San Joaquin County man, Aaron Paradiso, a quadriplegic facing cultivation charges. Some wondered if this pattern of activism led to the re-arrest on a federal warrant for the same “crime”? Double Jeopardy would only have applied after the jury was sworn, and in Costa’s state case they had not been when the feds took over on the case.  Dustin is currently serving a 13 year sentence to be released in 2018.

With a vigorous medical marijuana defense planned for state court, how did this arrest become a federal matter? Prosecution claims it was simply based on the plant count, but Costa’s supporters think there may have been more to it then that. They believe he was a political target used to send a message to patients in California.